Art Musa's consist mainly in the global management of art exhibitions, from the planning stage to their conclusion, cultural, design, fashion and sport events. Everything gravitates around Alain soul and ideational spirit.
Critical texts, external drafting and catalogs printing, direct management of all events, promotion, marketing, communication, press office to different services related to insurance and transport of artworks in collaboration with leading specialist companies of the sector.
Through Alain's Art Critic and Curator, Journalist regularly accredited in the register Pubblicisti List, personal and collective exhibitions, book presentations or initiatives, art events but not only, represent the mission for an endless research, always full of satisfactions.

"I am a professional art critic and curator. I am a freelance journalist accredited". Born on 1969, he began his artistic training around a figurative world of a post-impressionist matrix, developed by a group of modern artists worked between the two world wars of the twentieth century. His research takes place between the nineteenth century, the avant-garde, modern art until contemporary art. He is an Italian curator, critic and writer of contemporary art based in Milan and Venice area. Now he is living between Treviso and Venice. In the city of Serenissima, he was probably among the last, as artistic director, to defend a group of twentieth-century masters known for having explored nature, landscapes and portraits (painters as for example Marco Novati, Eugenio Da Venezia, Neno Mori, Carlo Dalla Zorza, Fioravante Seibezzi, Gigi Candiani, Aldo Bergamini, Mario Varagnolo ...). In this context, the artistic monographs "Marco Novati Volti Vissuti" and "Gigi Candiani Atmosfere Rarefatte", written years ago, have given way to a debate on the importance of these figurative artists in the Italian art history of the twentieth century. He studied art history and business economics at university obviously, but he doesn't like to write these qualifications with the famous abbreviation of dr or similar (dottore, phd, doctor, etc.). After the "Quod erat demonstrandum" project, where for few months more than five years ago, he highlighted the disinformation and envy of society but above all the desire to discredit for free without going back to the source, is against all those forms often pursued in the world artistic, even free of charge, capable of defaming. It is and will be proactive towards a philosophy based on planning, ideation, creation and realization. As free lance journalist, accredited to the National Order, he is writing for the most important Italian magazines (when they paid). During his career he has interviewed the most famous international artists such as Sir Anthony Caro, Marc Quinn, Shozo Shimamoto, Hermann Nitsch, Jacques Villeglé, Fabrizio Plessi, Gianni Berengo Gardin, Riccardo Licata, Eugenio Carmi, Rabarama, Achille Perilli, Luca Alinari , Alberto Biasi, Omar Galliani, Xu Deqi, Helidon Xhixha, Marc Quinn and many others. In 2017, a selection of all these fundamental artistic contacts were published in the book: “Tracce Segni Macchie Bruciature Concetti Scatti Tagli Buchi”. The collaborations with Italian critics who have been operating for several years at the media level were also fundamental. There are many locations where he collaborates, mainly organizing personal exhibitions. Its goal is to enhance art talents, who can highlight true and non-trivial contents, never forgetting those who have already traced fundamental expressive processes. His motto is: always put artists first thanks to their respective artistic creations, linked to a rich simplicity. 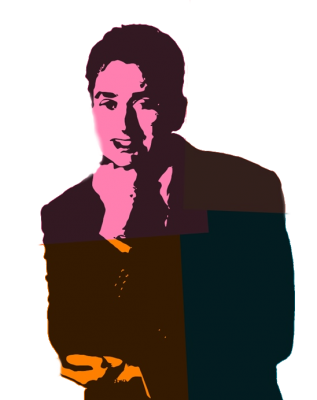